Back
Take part in the 1st International „End Polio Now“ Go Tournament!
By Christoph Klawe | News | 20.12.2020 18:45 | Views: 3462 | Comments: 1
Sure, there are more important problems in life than Go, but sometimes Go can help at least a little bit to solve these issues, too. One such issue is poliomyelitis („polio“). This terrible virus disease used to be very frequent. It affects mostly children, destroys nerve centers and often leads to severe and lasting handicap or even death. Poliomyelitis can be effectively prevented by a well explored and safe vaccination. Thanks to this, the number of new cases per year went down from 350,000 in 1988 to less than 100 in 2019. Now, polio exists in only two countries of the world, Afghanistan and Pakistan.

Large efforts were needed to make the vaccine available throughout the world and deliver it to those in need. The establishment of effective networks of health workers „in the field“, their education and the establishment of infrastructural resources were the key to success. Ongoing efforts will be necessary to maintain the achieved successes and extend them to complete eradication of polio everywhere on earth. We are very close to eliminating this viral disease for good!The eradication campaign to „End Polio Now“ is actively supported by the NGO Rotary International. In one club in Germany (Rotary Club Schweich Römische Weinstrasse), we had the idea to organize an international Go tournament to support „End Polio Now“. This project combines peaceful international collaboration in a cultural event in full accord with the ideas of Rotary International and the support for the polio eradication campaign.

The initiators were exceedingly fortunate in gaining the support of the Confucius-Institute of the University of Trier, Germany, which joined the project as an official co-organizer, the German Go Federation (DGoB) and the support of the European Go professionals Guo Juan and Mateusz Surma.

We would be delighted if as many international go-players as possible join the tournament to enjoy inspiring matches, to meet international friends and to help „End Polio Now“.The tournament will start on 16 January, 2021. All participation fees go to 100% to “End Polio Now”. All prizes are donated by our sponsors. We play 5 rounds McMahon system, spread out over two months. There will be a special competition for city teams, so forward this information to your Go friends to get a team together for your city!

All further information and registration on
www.dgob.de/wettbewerbe/end-polio-now 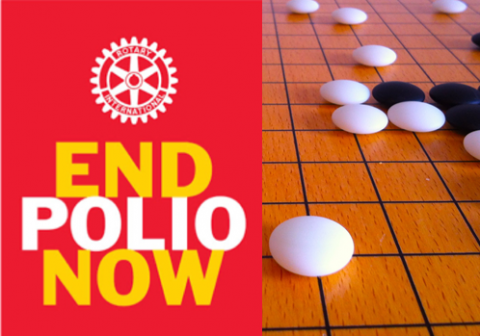