Back
World Student OZA Championship 2017
By Laura Avram | International | 27.02.2017 20:04 | Views: 5302
The World Student OZA Championship took place last week at the beautiful Ginza Internet Forum in Tokyo. It was the 15th edition so far and 16 players from all over the world competed over 4 rounds in order to decide the world's best student go player.
In order to play in this tournament, the players first had to qualify online in a tournament that took place on Pandanet.

The qualification tournament (November 2016)
Every year there will be 3 players who qualify from Europe: 2 male players and 1 female player. The qualification tournament was played at the beginning of November, and there were 9 female participants and 24 male participants. Among the male participants were players like: Benjamin Dréan-Guénaïzia, Dusan Mitic, Mihai Valentin Serban and Péter Markó (the European Student Champion for the last two years). The players who qualified were: Laura-Augustina Avram (2d), Amir Fragman (5d) and Stanislaw Frejlak (6d), who flew straight to China after the tournament where he will be studying go for the next 6 months.
The actual tournament (February 2017)
In my opinion, the level of the players was quite high: a few ex-inseis were competing in the tournament and there were 6d players finishing on the 12th and 13th places. The results tend to be quite constant during the different editions: male players from Korea, China, Chinese Taipei and Japan tend to finish on the first places. That's what happened this year as well.

From the beginning there was quite some pressure upon Japan's Ozeki Minoru to keep the title that he won last year. Usually the Japanese players don't obtain the top places in this tournament, so having a Japanese winner must be a source of great pride for the organizers. It's important to mention that the citizenship doesn't matter for this tournament: in both the qualification, and the actual tournament, you play for the country of the university where you study. So even though Sanghyeop Lee played for the US, he is actually a very strong Korean amateur player.

One of the things I personally liked a lot was the fact that each of our games was being recorded by the volunteers, which were students themselves. They have also done their best to offer us a pleasant stay. The language was at times a barrier between the participants (during our socializing evening we tried playing a game and we were translating to and from four languages: English, Chinese, Korean and Japanese, and at times even some Portaniol could be heard in the room :-) ).
The best ever result of a European is that of Antti Tormanen at the 2013 edition, who finished in 3rd place. Usually Western players don't have particularly good results at this tournament.

The organizers of the tournament were: The All-Japan Students GO Association, Nikkei Inc., PANDANET INC., The Nihon Ki-in and The International Go Federation.
For more informacion about the tournament, more game recordings and results click here. 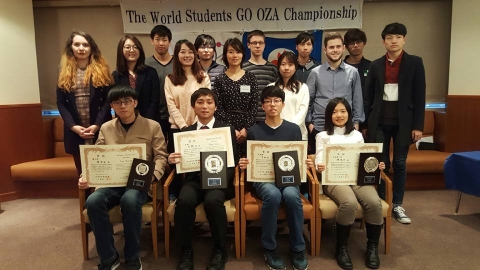