Back
3rd World Students Pair Go Championship in Japan
By Laura Avram | International | 11.12.2016 23:06 | Views: 3917 | Comments: 1
This year, together with three more European players, I had the pleasure to participate in the 3rd edition of the World Students Pair Go Championship in Tokyo, Japan, on the 3rd and 4th December 2016. The four of us formed two pairs: Julia Seres (2d) & Marko Peter (4d) represented Hungary, and Laura Avram (2d) & Johannes Obenaus (6d) represented Romania & Germany. We had qualified for this tournament because we were the best positioned guys and girls at the European Student Go Championship, which took place this year in September in Amstelveen.

Altogether 16 pairs with participants from 11 different countries proudly represented their countries and continents at the tournament. As in the case of any pair go tournament, each pair consisted of a girl and of a boy. Here they had to fulfill two more conditions: to be university students, and to be under the age of 30. There was, however, one exception: one of the Japanese pairs was made out of high school students, who qualified to take part in this tournament. The Korean players were students of the Myongji University, where it is possible to study go as a major at a bachelor, master, and PhD level.

The winners of the tournament were: Akiko Fujiwara (6d) and Shodai Hirano (6d) from Japan.
The runners up were Manami Takeno (6d) and Shuntaro Sugita (6d) from Japan. The European players did fine, but we were hoping for slightly better results: Johannes and I finished in 7th place (2/4 wins), while Peter and Julia finished in 12th place (¼ wins).

What was special about this event was that along with the pair go playing aspect, we also had the chance to enjoy a social aspect. First of all, there was a friendly game and a ceremony for which we all had to get dressed in our National Costumes, which was a good way for us to get to know more about each other, as well as about the culture of our different countries. Secondly, the participants went together on a trip to the mountains in Yugawara. There we joined a workshop and we got to learn about the beautiful “public art” made out of porcelain reliefs and stained glass in a particular studio. After that we had the chance to create our own glass art by gluing pieces of glass of many shapes and colors onto a special support. What I noticed was that the players proudly represented their home universities as well, not only their countries, i.e., Amira Song, a Harvard student, created a glass art that reminded of her university and we could often see her wearing T-shirts with her university's name during the event. In the evening we enjoyed sushi made by a young and famous prize winning sushi cook. The next day we went to Owakudani, where we could see the volcanic steam coming out of the earth. However, the thing that delighted us the most on this trip was the eye-catching sight of mount Fuji on the other side of the valley.

I honestly believe that all of the players enjoyed this particular experience which made more of us eager to practice and improve both our go and pair go skills. The organizers really did a great job with this tournament.

You can see here the full results, as well as the games which were broadcast on Pandanet during the tournament. 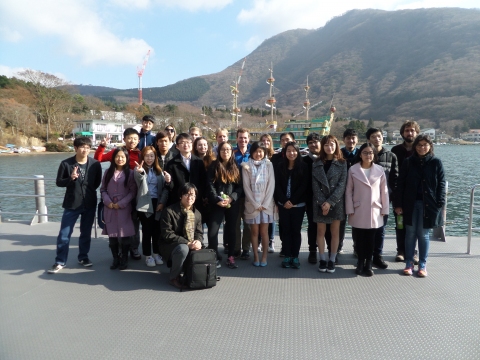 Comments:
Peter Dijkema
#1
13.12.2016 1:54
Excellent. Laura, our report convinces me once more that we need to adopt in Europe to the orginal stle of the Japanese in Pair-Go in dressing up well and representative for one's university, country and culture for the occasion of official championships, including all the fun of best dressed pair election.

In the variation of European Free events I propose, all audience can vote in these competitions. In our European style, we will have main leagues with national top-pairs from each countr top-three and more gender-free leagues,with pairs of which one plaer dresses up masculin and one feminin, so all who want can take part.

Pair-Go events are standard repertoire at European Free Championships as at EGCs.
However there will be also a special yearly Student-Go and Pair-Go events lasting nine ays, as all its title fights, as main events of the month at the EFGH calender..

Students European Free could be in November and Pair-Go in February (Carnaval).