Back
The 22nd European Youth Go Championship in Grenoble
By Dominique Cornuejols | News | 22.02.2017 17:14 | Views: 8265 | Comments: 2
With 220 children coming from 18 different countries and more than 150 parents and team supporters, the EYGC was already in itself a huge event. But the addition of the International Grenoble Tournament (TIGGRE – Ellie Cup), which also attracted 80 participants, the presence of go professionals (Hayashi Sensei 6P coming from Japan, Catalin Taranu 5P, Ilya Shikshin 1P and Mateusz Surma 1P), of very strong Korean players (In-seong Hwang, Chi-min Oh, Seong-jin Kim) and of our invited guest Yumi Hotta, scenarist of the manga Hikaru no Go, transformed this event into quite an exceptional gathering.

Most of the activities took place in downtown Grenoble. With snow covering the mountains around, a bright sun and a mild weather, all the conditions were met to make this year’s EYGC a warm and memorable event. For many of the children, it was their first tournament ever and their excitement was palpable. However, as soon as the games started, silence and seriousness took over. It is hard to believe that 92 boys and girls under 12, all in a large room, can stay so calm and concentrated. Same quietness and focus was visible among the 75 youngsters of the U16 section and the 52 ones of the U20 section. However, clearly, most of the U12 children were not expert in time management and, despite a thinking time of one hour per player, they often finished their game in less than half an hour. For these fast thinkers, the organisers proposed a friendly tournament on a 13x13 go-board, ten minutes each, sudden death (meaning « no byoyomi »). This was more appropriate to their eagerness to play and play again. It was also the opportunity to meet other players and make friends in a cool atmosphere. The 13x13 tournament was very successful, with about 150 players involved and several hundreds of games played. 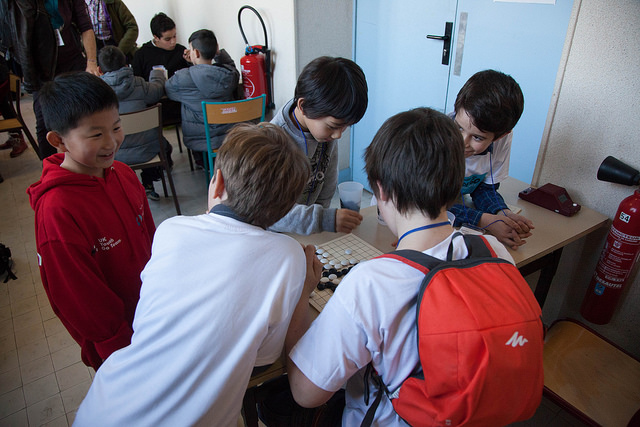 The excitement was at its peak when Yumi Hotta arrived in the room to play some games with children. On Sunday, a brand new activity took place in a sports hall, very close to the tournament’s venue: a team contest associating go and climbing. As climbing walls are very popular in Grenoble, a hotspot of alpinism, this gave us the idea to mix go stones and mountain rocks ! The competition continued under the benevolent eye of Hayashi Sensei. As the U12, U16 and U20 top groups were close to the Ellie Cup competitors, the young players could have a look from time to time at the games of their elders. Games of the top boards were also broadcasted, both at the competition venue and on go servers. During the EYGC, we tested a new system of capturing the moves on a go-board by a camera, using a software behind to transform the information into a kifu in the sgf format. At 6 pm on Sunday, Yumi Hotta made a conference in front of her many fans, (youngsters and adults as well). She explained how she worked with go professional players to produce the storyboard of Hikaru no Go.
After this fascinating conference and a series of questions and answers, the attendees were offered a « surprise »: they were shown the trailer of the new movie « The Surrounding Game », which will be distributed soon around the world.

Then it was time for the prize giving ceremony of the Ellie Cup, won by Chi-min Oh, a newcomer in the Grenoble Go Club. A more detailed report on this competition will be published soon.
Monday was a quieter day, as most of the Ellie Cup competitors had left. At noon, it was time for the group photo in the entrance hall of the EYGC venue. When the last battles on the go-board finished in the 6th round, the winners were known and all participants were invited to go to the City Hall for the prize giving ceremony. The large reception room of the City Hall had never been so full! After some speeches by the officials (representatives from the Grenoble City, from the Isère Department, from the EGF, the French Go Federation and the Grenoble Go Club), Jana Hricova organised the prize giving for the European Youth Go Team Championship. Winners are the team of Russia, second Germany and third Hungary. Congratulations to all ! More information on this competition here.
Then the champions of the EYGC came on the stage to receive their trophies, under the great applause of the public.

Here are the names of the winners:
Special congratulations too to Kajmin Vjacheslav, who was champion last year in the U16 category.
Full results can be found here.

Qualified for international youth championships are:

U12 section
And, last but not least, the friendly 13x13 tournament, with prizes for a girl and a boy in each of these challenges: the largest number of games played (1st Diana Khabibullina and Augustin Brahim, 2nd Naoto Hashiguchi) the largest number of wins (1st Nedjma Kechchab and Laouen Durand) and the best percentage of victories (1st Clara Morand and Tudual Durand, 2nd Robert Medak).
Taking opportunity of this large European event, the Grenoble Go Club also organised an exhibition and a series of activities for the general public in a beautiful shopping centre (known as « La Caserne de Bonne ») very close to the EYGC venue. « La semaine du Jeu de Go », from 18 to 25 February, is offering free initiation to the game of go and more than 150 people already showed up on the first Saturday.

In view of this Go Week, an artistic exhibition « about the game of go » has been made, with dozens of artworks, in partnership with l’Annexe des Beaux-Arts in Grenoble. In the very end, I would like to thank the director of this edition of the EYGC, José Olivarès-Florès, who conceived most of the activities and side events and motivated all our partners to participate in them. On the picture, José is in discussion with Eric Piolle, mayor of Grenoble (left) and Fabien Malbet, deputy mayor (right), during their visit to the competition venue. They are both strongly supporting the development of go in the Grenoble schools.
More than 60 members of the Grenoble Go Club and many parents plus go friends from other go clubs were involved in this event at some stage and we thank all of them for their dedication. We also thank our many sponsors, without whom nothing would have been possible.

See you next year in Ukraine !

Credit for the photos : Olivier Dulac
More photos can be found on https://www.flickr.com/photos/gogrenoble. 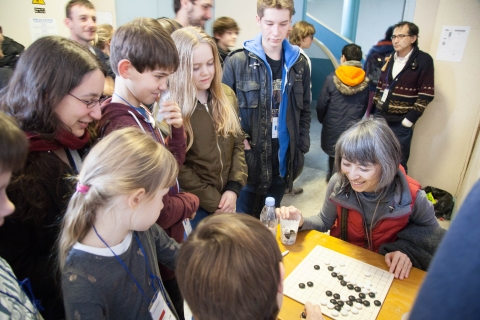