Back
European Pair Go Championship 2017 - Second day
By Laura Avram | News | 03.04.2017 21:43 | Views: 5933
The 2nd day of the tournament came with high expectations for the players. Some decisive games were about to take place and the time pressure would do anything but make the battles any easier. As a participant I certainly believe that the 45 minutes sudden death raised my adrenaline during all of the games. It probably did the same for Germany's Zhao Pei & Lukas Krämer during round 4. As one of the two pairs who had 3 wins from the previous day, they were paired with the only other pair with 3 wins: Russia's Natalia Kovaleva & Dimitri Surin. Even though the German pair was leading the game, the time pressure had the final say, and after losing quite many points in the endgame, they ultimately lost by 1.5 points with 6 seconds left on the clock.

Another dramatic game from this round was the one between Macha Jumelin & Tanguy le Calve and Julie Artigny & Benjamin Papazoglou. Both pairs had considerable time problems and Jumelin & le Calve passed when they had merely 4 seconds left on their clocks and Artigny & Papazoglou, who were probably taken by surprise with such a pass, and who themselves had only 10 seconds left, just passed as well. So what should happen when both sides have passed, but the territories are not enclosed yet? There is a Japanese rule that explains what should be done in this case and the solution is counting the points in a very special way. After the intervention by the referee and after counting according to this rule, Jumelin & le Calve were the winners.

The 5th round's games were an even tougher experience for the players: the two top Russian pairs got to face each other and it wasn't easy: Kovaleva & Surin lost a big group and they were behind by quite many points, but both pairs continued the game under enormous time pressure. Ultimately, after some confusion with the move order, Svetlana Shikshina & Ilya Shikshin lost on time, but the confusion came immediately after their opponents seemed to have lost on time as well. In the end it was decided by the referee that Shikshina & Shikshin were the first ones to have run out of time (even though they had actually said pass, but the clock wasn't pressed fast enough), so Kovaleva & Surin won the game.

Round 5. ShikshinaShikshin vs. KovalevaSurin.sgf
Download Sgf-File
Round 6 didn't bring along many surprises. The most exciting game from the top boards was Katarzyna Straszewska & Mateusz Surma against Pei & Krämer. Even though they had a really good tournament, Pei & Krämer proved to be stronger and defeated them. Another game that's worth mentioning is the one of Shikshina & Shikshin against Jumelin & le Calve. Jumelin & le Calve were not in the top group, but the two had 4/6 wins, which I believe was a tremendous achievement for them, particularly since the rank difference between the two of them was so very great and that they never played together before.

Round 6. KovalevaSurin vs. EnteTeuber.sgf
Download Sgf-File
In a way, what's surprising about these pair go championships is that they attract many strong players, even though the stakes are not particularly high. 5-6 dans, even when they play with players that are a few stones weaker still succeed in finding the excitement of the game. This year the high level of the players was particularly easy to notice: adding to the usual strong pairs like Russia's Kovalena & Surin and the professional siblings Shikshina & Shikshin, France's Antoine Fenech & Ngoc-Trang Cao, and Czechia’s Jan Hora & Klara Zaloudkova, this year brought quite a lot of very strong new pairs to the table: from Germany Krämer & Zhao and Benjamin Teuber & Lisa Ente, Surma (one of the new European professionals) played for the first time in this tournament and together with his partner occupied the 4th place (being separated from the 3rd place by only a few SOS points).

The other European pro player that was hanging around was Ali Jabarin. As opposed to the other two, Mateusz Surma and Ilya Shikshin, Ali was not there to play, but instead to review the top games online for the Pandanet audience and he helped us with reviewing our games in-between rounds. And trust me, when you have a pair made out of people who are extremely confident in their own moves and plans, it does come in quite handy to have a very strong neutral player who can calm down the spirit and elucidate the mysteries ^_^.

The full list with results can be found here.

Special thanks go to the organizers who found a splendid place for us to play close to the European Parliament, and who made sure that we had a pleasant time at the tournament and in the beautiful city of Strasbourg.

P.S. If you are not very familiar with the Pair Go rules, then you can watch here a nice video by Hajin Lee explaining how it goes. 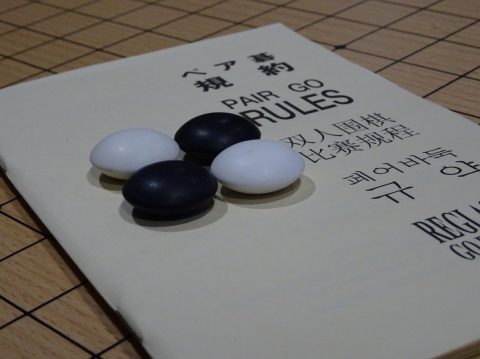