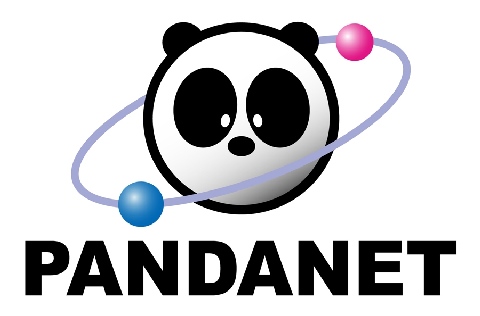 The 6th Pandanet Go European Team Championship has started in September 2015. In this EGF-tournament 34 countries/teams fight for their placements in Leagues A,B,C. The best 4 teams from League A qualify for the Finals of the PGETC that will be held  during the EGC in St. Petersburg. The games are played on internet on Pandanet-IGS in the EuropeanTeamChamp room generally Tuesday evenings (20:00 CET).

We can basically divide the teams into 2 groups:
Favourites: Russia(3xChampion), France(1xChampion), Czechia(1xChampion), Ukraine, Romania,  -only this 5 countries+Hungary have ever been qualified to the finals
Others: Netherlands, Finland, Serbia, Sweden, Germany.
Though all the teams in League A can play good enough to qualify for the finals.

Will the teams show their performance from last year?

There are 12 teams in League B fighting for two spots to go up to League A. The first placed team qualifies automatically and the second placed team plays a relegation game against on 5 boards against the team that gets 9th place from League A

All the matches were without a bigger surprise, except for the match Austria-Slovakia, where Slovakia managed to win on three boards. 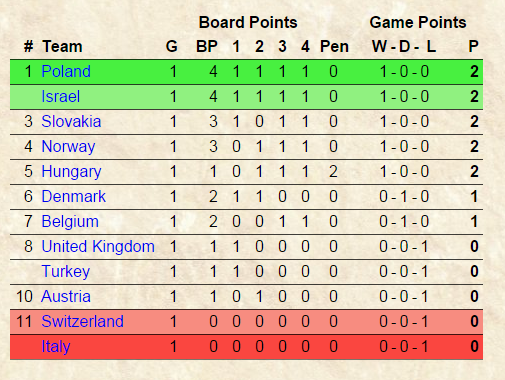 There are 12 teams in League C fighting for two spots to go up to League B. The first placed team qualifies automatically and the second placed team plays a relegation game on 5 boards against the team that gets 11th place in League B.

The favourite teams in League C are Slovenia and South Africa, and also Bulgaria, Croatia, Lithuania and Spain.

All the matches finished without a bigger surprise. 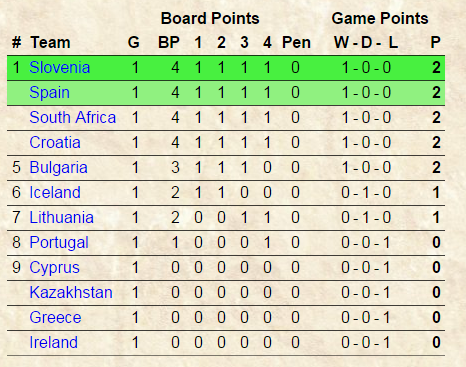