Back
Silk Road Tournament 2018 + 1st report on CEGO Academic Program
By Gabriel Wagner | International | 27.08.2018 14:13 | Views: 3083
This is the first in a series of articles covering the CEGO Academic Program for this year. In this series, I want to cover all kinds of interesting things that will happen during our stay in Beijing, including reports on the tournaments we will play, everyday life in Beijing, interesting positions from our training games and study, and hopefully many things nobody is expecting right now.

I will try to write the articles on a regular basis to allow readers to follow our training as close to “live” as is possible. This year there are 6 young European players who will study go at the Ge Yuhong Go Academy for the next 6 months:

Sinan Djepov from Bulgaria (will leave at the beginning of November)

and me, Gabriel Wagner from Germany.


As a start-up to the training, all of us played in the Xi´An Yanta „Da Du Hui Cup“ Silk Road City Weiqi Open in Xian which is located about 1000 km to the south-west of Beijing. Besides us, there were 8 other Europeans players, among them also three EGF-Pros Ilya Shikshin, Pavol Lisy and Artem Kachanovskyi. On the morning of our travel from Beijing to Xian, we were surprised to hear that in Xian we will be greeted by none other than the president of the Chinese Go Association to have a talk with us. Even when we entered the modern and well-prepared conference room of the luxurious hotel we were still not sure if he was really about to talk with us and not some more official and worthy persons. In the end, he really asked each of us about the situation of go in our country in Europe, what kind of problems we experienced etc. Also, he asked about our opinion on good locations for next years Silk Road Tournament, which is supposed to be in Europe for the first time ever. Of course, we didn´t reach any conclusions on that question, but it was certainly a very interesting talk and the Chinese Go Association made a great impression on us.


The tournament itself turned out to be better for some than for others...^^

In the end, Tang Zheng Nan from China took first place with only 1 loss out of 8 games. However, two Europeans managed to get into the top 3 with Ilya Shikshin 2p taking 2nd Place and Pavol Lisy 2p 3rd place. The third best European player was Alexandre Dinerchtein 3p on 10th place. Artem Kachanovskyi was unlucky to end up in 11th place, because there is only prize money for the first 10 places…

The Silk Road tournament also has a team competition which this year was won by the Russian Team (Shikshin, Dinerchstein and Anton Chernykh). This also happened thanks to the very good performance of Anton with 5 wins in 8 games making him the best of all 6 CEGO students in this tournament.

The day after the tournament ended, a short sightseeing trip to the famous Terracotta Army close to Xian was arranged for participants who were still there. The question of if the unbelievably huge masses of people or the antique warriors were the greater attraction, is difficult to answer.

In the afternoon that day, we had a really nice friendship match with kids from a local go school in Xian. The children were very excited about meeting the “exotic” European players and even playing with them. For some of us, it may have been the day on which we signed the most fans in our entire life. After the games, they even gave us a nice gift bag with a go stone necklace.


My next article will cover mountains of go stones, mysterious numbers, supercomputers and many other things, wait for it! 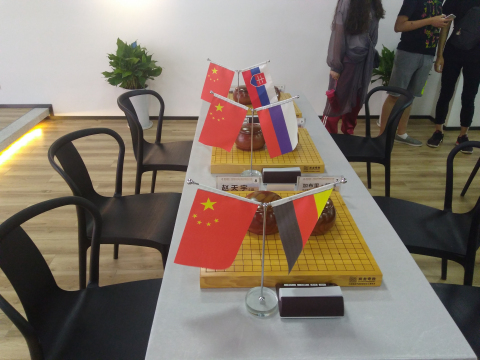