Back
Report on CEGO academic program (4) - photo gallery + China Europe exchange tournament
By Gabriel Wagner | International | 29.12.2018 8:48 | Views: 3324
It has been a while since my last report about our training. First of all, I should mention that our group lost some of its members: Sinan left on November 1st to finish High School in Europe (good luck!), Dominik left at the end of November after getting sick, and Anton left just a few days ago.

By now, studying at the school became a routine, I would say we settled in very well. Also, it seems that the school got more used to us and the students realised that even though we are Europeans, we are also just normal people.

I tried to represent what our daily life looks like:


However, the monotony of this is often broken by very nice experiences. I decided to give you an overview in the form of a photo gallery:

The "Big Cycle" is a tournament which is held at the beginning of each month to determine in which league each student will play afterwards. Usually, students from two other go schools also compete this tournament.

On the first evening, we met Garry, a Chinese man who is fluent in English. We arranged a friendship match with his students.

At the beginning of December something really unexpected happened: On Sunday, December 2 we were told that we will go to a tournament on Wednesday, December 5. We had no idea whatsoever about this tournament and what it would be about.

All the more surprising was our arrival at the train station: a camera team was waiting for us while a nice lady was handing us huge flower bouquets.

The tournament was held in Ningyang (宁阳) in Shandong (山东) province which is the birthplace of Confucius. The area around the playing place was really nice.

At dinner on the first evening, we started to learn more about the nature of this tournament. Apparently, it was a kind of a friendship or exchange tournament between young European and Chinese players. The slogan of the tournament (which could be found EVERYWHERE in the surroundings of the playing room, on the playing tables, on walls…) was “China meets Europe, go brings us together” with a common variant for the second half being “go bings us together”.

In the beginning, it seemed that the plan to “bring us together” was not working out too impressively because the situation was kind of cringy for us as well as for our Chinese counterparts. However, maybe this shared feeling of embarrassment made it much easier to get along with each other. After a while, we started to actually communicate quite a lot with them, they showed us around in the area and we even played some casual games in our hotel rooms in the evenings.

At this tournament, we got impressive demonstrations of Chinese hospitality over and over again. During meals, always one of the Chinese students would refill our tea cups. Once we tried to be as nice as them and do the same to them. However, we failed miserably, they just took the teapot and started to treat US instead. We concluded that competing with Chinese in terms of hospitality is even more difficult than in Go.

The tournament had 14 participants and we played 5 rounds with 45 minutes sudden death. Personally, I found these rather unusual time settings refreshing to play since some extra adrenaline was added to the games.

In the end, Europeans got the first 3 places in the tournament with Anton taking 1st, Stanislaw 2nd and Oscar 3rd place. It was not, however, as easy as it sounds as the Chinese students were tough opponents.

Chinese reports with many more pictures can be found here and there.
The tournament has also been covered by the local news TV (starting from minute 02:58). 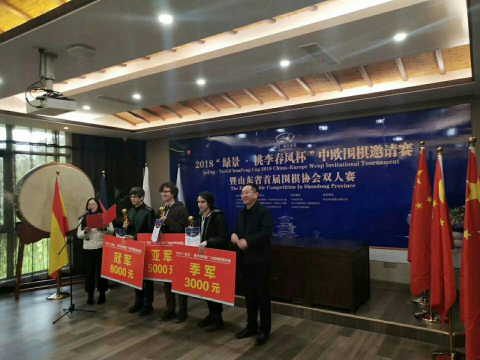