Back
EWGC 2019 in Trier
By Nicole De Beer | News | 11.09.2019 9:23 | Views: 2905 | Comments: 1
On 6, 7 and 8 September the European Women's Go Championship was played in Trier. It was quite a strong tournament, between them, the 36 players held 45 dan. It was also a representative affair, with 11 countries participating. In particular, the Russian delegation promised to be a strong team, with two 5 dans, one 4 dan and one 3 dan player. It soon became clear that Ariane Ougier 3-dan from France, runner-up in last year’s championship, would again be a serious competitor for the title. She won her first three games, one of which against Dina Burdakova 5-dan, and so in the fourth round she was paired against Natalia Kovalova 5-dan, the only other player with 3 wins. Ariane won that game convincingly, by a margin of twenty points. In the fifth round both Ariane and Natalia won their games, so Natalia could only catch up with Ariane if she would win her own game and Ariane would lose hers. However, the latter kept her calm, which meant that Ariane Ougier became the European Women’s Champion of 2019 with a perfect score. Directly behind her the results were dominated by Russia, with Dina Burdakova (who won in the last round from Natalia) in clear second place, and then Natalia Kovalova, Virzhinia Shalneva 4-dan, Elvina Kalsberg 3-dan and the German Barbara Knauf 3-dan sharing third place. Further down the results table there were remarkable scores by Marianne Szychowiak 7-kyu who managed to win all of her 6 games, and by German 13-year old Angelika Rieger 8-kyu who scored 5 wins and only lost to Marianne. A nice detail is that the organizers had found both Guo Juan 5-pro and Lukas Krämer 6-dan willing to give game reviews, which meant that even a lost game could become a learning opportunity.Apart from the game results it was also in other aspects a special tournament. The Konfuzius-Institut Trier had provided ample sponsorship, which allowed tournament locations that were somewhat unusual. The first round on Friday afternoon was played in the courtyard of a local winery, followed by a visit to the vineyard and a wine-tasting dinner. On Saturday, the organizers had managed to secure the main hall of the Kurfürstliches Palais in Trier, which is an incredibly beautiful baroque hall with paintings on the walls and ceiling, decorated by enormous chandeliers. A side effect of this location was that it turned out be a great opportunity for Go promotion to unsuspecting visitors of the Palais, and some visitors even played their first 9x9 game. In addition, the Palais is located right in the middle of downtown Trier, which allowed us the time between games and reviews to visit the Roman thermal baths, the Trierer Dom or other famous sights. The tournament location on Sunday was ‘just’ the university of Trier, but the organizers had managed to turn even that into something special. Just before lunch there was a Chinese dumpling cooking class, and the lunch itself was a fantastic buffet in one of the university restaurants. All together this was a very nice and very well-organized tournament, thanks to organizer Marc Rieger and sponsor Konfuzius-Institut. If the organizers of next year’s EWGC (Saturday 5 through Monday 7 September 2020 in London) also manage to create such a celebration I will definitely be present!
Nicole de Beer

Some additional remarks: For those not present, the event was broadcasted on KGS and Twitch, thanks to Gabriel, Keyun, Cornel and Li Yue:
https://www.twitch.tv/europeangofederation

A video about the event is in preparation and will be linked to here and on the web
page of the Confucius Institute: konfuziusinstitut.uni-trier.de 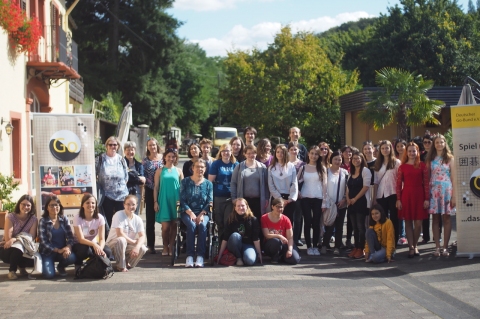 This article was written by Nicole De Beer

Comments:
scurge
#1
12.09.2019 9:07
Thank you for the article, very pleasant reading. I am curious about Ariane's results in the future. If she can beat 5dan level so convicingly, we may see her at EC soon