This year's tournament was special. In a change from previous years, it included one more round (six games over three days) and a new overtime system (the Fischer time: 45 minutes of base time, plus 15 seconds per move played). Moreover, the tournament venue changed each day. In short, it was a historic tournament in a historical city! Friday at the winery

Trier is nicknamed the "Rome of the North" as it was a Roman colony from the 1st century AD. The well-preserved Roman monuments (Porta Nigra, the bridge, the baths, amphitheatre, storehouses), the Cathedral of St Peter and Church of Our Lady belong to the UNESCO World Heritage Sites.

The rich history of Trier does not end with the architecture. It is believed that the Romans have started the viticulture (winemaking) in this area, as producing wines locally was cheaper than importing them all the way from the South. The especially famous grape is Riesling, from which somewhat acidic white wine is made. The participants had a chance to learn about it first hand, as the tournament commenced at Winery Schleimer outside of the city. The organizing team had put a lot of thought into making this tournament special. The names of the players were written in Chinese characters. Next to the boards were Chinese fortune cookies. (I could not wait and had to open mine before the game. Although "Believe that you can make it" was a very encouraging message, I went on to lose that round.) After the games, the owner of the winery gave us a tour, explained the winemaking process and its biggest challenges (which were climate change and... wild boars). Afterwards we were treated with the welcome dinner consisting of local specialties and an optional winetasting. Although the leisurely atmosphere contributed to a very friendly start to the tournament, we knew that the competition was going to be tough. There were sixteen dan players participating in the tournament.Before the end of the meal we learned what the pairing for Saturday morning’s round would be.

Saturday at the palace

Usually the tight schedule of go tournaments does not leave much time for sightseeing. Luckily, this time we could play in one of the most breathtaking attractions of Trier - the Electoral Palace, the residence of the Archbishops and Electors of Trier. The Rococo staircase led us to a richly decorated hall. There, in the first round of the day, two European Women Go Champions faced each other: Natalia Kovaleva (5 dan, Russia, winner of EWGC 2018) and Manja Marz (3 dan, Germany, winner of EWGC 2017). Early in the game, a fight emerged on the right side of the board, and Manja launched an attack on Natalia's two groups. However, later, Natalia secured many points on the left, and played strongly on the bottom right corner. In the end, Natalia has won by 20,5 points although she told me later that it was not such a good quality game from her side.

Manja_Marz_vs_Natalia_Kovaleva.sgf
Download Sgf-File
On the second board, Dina Burdakova (5 dan, Russia) and Ariane Ougier (3 dan, France) played a relatively peaceful and a close game (at least from a spectator’s point of view). In July Dina won against Natalia and thereby became the Russian Women’s Champion. Ariane currently holds the titles of the French Women Champion and the French Youth Champion. This young, talented lady studied go in Korea earlier this year. She won the game by 1,5.

In the meantime, the tourists peeked through the doors to see the wall paintings, enormous chandeliers and... focused female faces. Downstairs they could watch the exposition of Chinese paintings, learn more about go, play their first game and witness game reviews by Guo Juan (5 pro), Lukas Krämer (6 dan) and Laurent Heizer (6 dan).

After a short lunch break, the third round commenced. Ariane played with Virzhinia Shalneva (4 dan, Russia). Virzhinia is another young rising star – she is the European Youth Go Champion Under 16. The ladies played last year at EWGC in Helsinki and Ariane won that game.

The highlight of this year’s match was the fight on the bottom side. It emerged within the first 100 moves and the resulting capturing race (semeai) would be decisive for the game. When it became clear that Virzhinia could neither save her group nor find compensation for the loss, she resigned.

Ariane_Ougier_vs_Virzhiniia_Shalneva.sgf
Download Sgf-File
On the other top board, Natalia played with Barbara Knauf (3 dan, Germany). After the first 50 moves Natalia managed to secure a massive terrain on the top side (more than 50 points). Although Barbara successfully destroyed Natalia's potential in the lower right corner and launched a powerful attack on the lower left group, the game was still tough for her. Around move 125, Natalia played a nice sequence, cutting off Barbara's group. The last chance for Barbara to catch up would be killing Natalia’s lower right group, but after Natalia secured life, Barbara resigned.

Natalia_Kovaleva_vs_Ariane_Ougier.sgf
Download Sgf-File
After this victory, the so far unbeaten Natalia faced the so far unbeaten Ariane. This time it was Ariane who managed to create a large influence on both the left and the right side and convert the greater part of it into a large territory. In the end, she won by 20,5 points. The game was reviewed online by Cornel Burzo (7 dan) and Yue Li (5 dan): https://www.twitch.tv/videos/478172335.

Virzhiniia_Shalneva_vs_Dina_Burdakova.sgf
Download Sgf-File
In the meantime Virzihnia played with Dina, and it was a rather short game. Each player secured two corners (there were no corner invasions which is quite rare nowadays, since AlphaGo has introduced early san-san invasion). Then, Dina attacked and surrounded Virzhinia's group, thereby creating strength towards each direction of the board. Soon after, her own group became under attack, but with move 125 she could save it by cutting away some of Virzhinia's stones. Virzhinia then resigned.

At the end of the day, Ariane was the only dan player who remained unbeaten. She was followed by five players who had just one loss: Dina Burdakova (5 dan, Russia), Natalia Kovaleva (5 dan, Russia), Elvina Kalsberg (3 dan, Russia), Barbara Knauf (3 dan, Germany) and Marika Dubiel (2 dan, the Netherlands).

Although Ariane has already beaten both 5 dan players, the game she actually found the most interesting was played on the next day.

Sunday at the university

The championship was organized by the Confucius Institute of the University of Trier. The institute aims to promote Chinese language and culture, which we could really feel today. First of all, there were side activities for the quicker players and the spectators: a Chinese dumpling-making class in the morning and a Chinese painting class in the afternoon. Additionally, between the rounds the participants were all invited to a nearby Chinese restaurant (note to the future organizers: all-you-can-eat buffet is a great lunch solution for any tournament!). And lastly, we have found some fortune cookies next to our boards again. In the fifth round Ariane faced her last Russian opponent - Elvina Kalsberg (3 dan, Russia). Elvina has a long playing history - she participated in the very first European Women’s Go Championship in 1996 and played over 700 tournament games in 142 European tournaments since then.

Elvina chose quite an unusual variation in the lower left corner. According to Cornel Burzo (7 dan) and Li Yue (5 dan), the result was not so good for her. As she felt she was leading, Ariane played solidly. It was difficult for Elvina to catch up. Towards the end, Ariane was leading by about 20 points, which is why Elvina resigned at move 224.

Elvina_Kalsberg_vs_Ariane_Ougier.sgf
Download Sgf-File
On the second board, Dina played with Barbara. This was Dina's favorite game from the EWGC because there were many fights. Indeed, it seemed that no opportunity to attack was missed in that game. Within the first 50 moves, Barbara secured life in the top left corner, but the resulting strength allowed Dina to attack Barbara on the top side. In the process, Dina's top right group became weak, but she has managed to settle it by taking the upper right corner. Afterwards, the fight moved into the center. Dina could capture Barbara's center group, but in return Barbara has secured some points on the right and the lower side. In the end, each player had one tiny corner on top and one huge territory elsewhere. Dina won by more than 20 points.

Dina_Burdakova_vs_Barbara_Knauf.sgf
Download Sgf-File
When I asked Ariane about which game she found the most interesting, she responded: "I think the most interesting one was the one I played with Manja. It was very long and very complicated and full of fighting! I had a lot of fun in that game (and a lot of sweat haha)" Indeed it was a long game - it consisted of nearly 300 moves. After the first 130 moves, Manja ended up with a one-eyed group with fewer than 10 liberties. For the next 100 moves she tried to force a capturing race with one of the groups which Ariane had around it. She did not succeed on the left side, but eventually managed to save the cyclops by capturing five white stones. At that point, Ariane was still ahead, but with the time pressure anything could still happen. Luckily, the game did not end on time and both players continued until the very end. Eventually Ariane won by 4,5 points. (You can watch the game review by Cornel Burzo and Li Yue here: https://www.twitch.tv/videos/478612807.

Ariane_Ougier_vs_Manja_Marz.sgf
Download Sgf-File
In the meantime, Dina and Natalia fought for the 2nd place. These old friends played 24 tournament games with each other (source: the European Go Database), and each of them won 12. When I asked Natalia which game of the EWGC she found the most interesting, she said: "The one with Dina, and I still do not understand how I could lose it." Dina won by 8,5 points.

This was the first time in history for a French player to win the European Women Go Championship. When asked during the prize-giving how she managed to become so strong so quickly, Arianne modestly said that she was simply trying to do her best. The final results are:

Apart from the new European Women’s Go Champion, Marianna Szychowiak (7 kyu, Poland) has also finished the tournament unbeaten. Amongst the kyu players, great performances were also made by Angelika Rieger (8 kyu, Germany) who won 5 out of 6 games as well as by Julia Bednarska (10 kyu, Poland) and Iris Ramacher (16 kyu, Germany) who scored 4 points each. There was also a special prize for the youngest player - Lea Gerhards (20k, Germany). The full results can be found here:
http://www.europeangodatabase.eu/EGD/Tournament_Card.php?&key=E190906A

Thank you to the Confucius Institute for hosting and organizing the championship and for permission to use the photos in this article. Also thank you to everyone who has contributed to turning it into such a successful and enjoyable event!

PS: They say early bird catches the worm, but the ladies who stayed the longest after the closing ceremony received additional fortune cookies. Here are some messages which we collected for you:

- "Believe that you can make it"

- "Your efforts will be successful"

- "Tomorrow might be the best day of your life"

Pick your favorite one for your next big challenge, and if you are a woman, we hope you will participate in the EWGC next year in London! 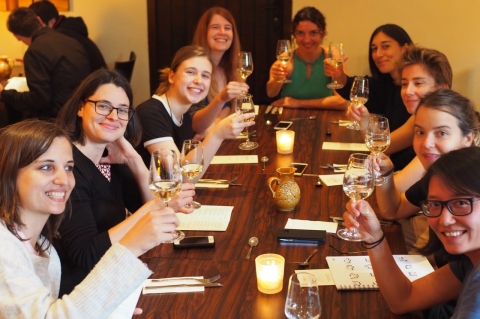