Back
A record participation for the third edition of the TIGGRE - Ellie Cup
By Dominique Cornuejols | News | 14.02.2020 20:54 | Views: 2116
The TIGGRE - Ellie Cup took place on 1st and 2nd February 2020, once again in the great venue of the WTC Congress Centre in Grenoble. There were 157 participants from 16 countries who showed up to play in one of the four competitions organised by the Grenoble Go Club that weekend. 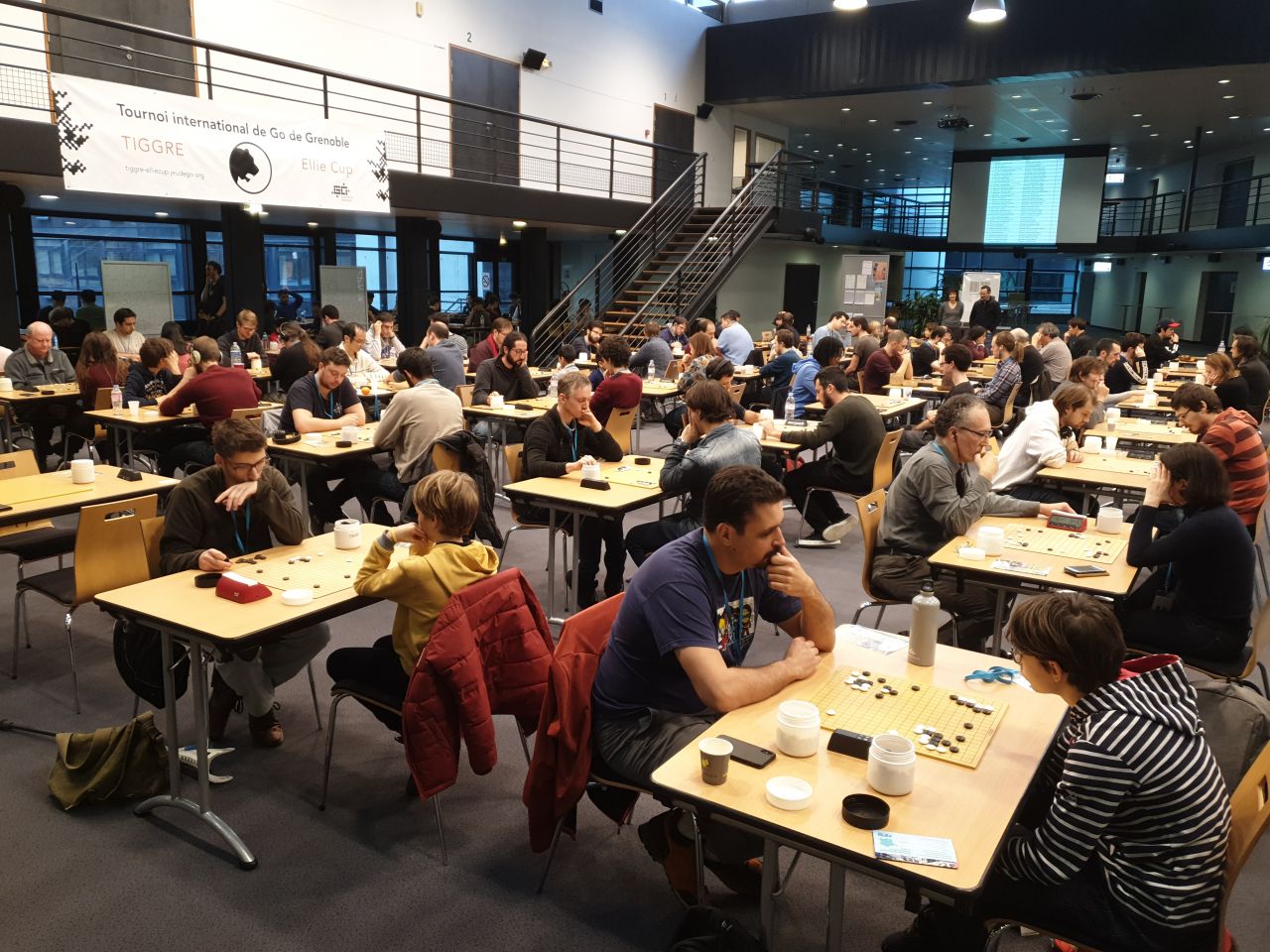 The Ellie Cup, the top group of the TIGGRE, sponsored as usual by In-seong Hwang, this year attracted four professional players and many high dan amateur players. With such a depth of strong players, the competition promised to be a tough one for all concerned. 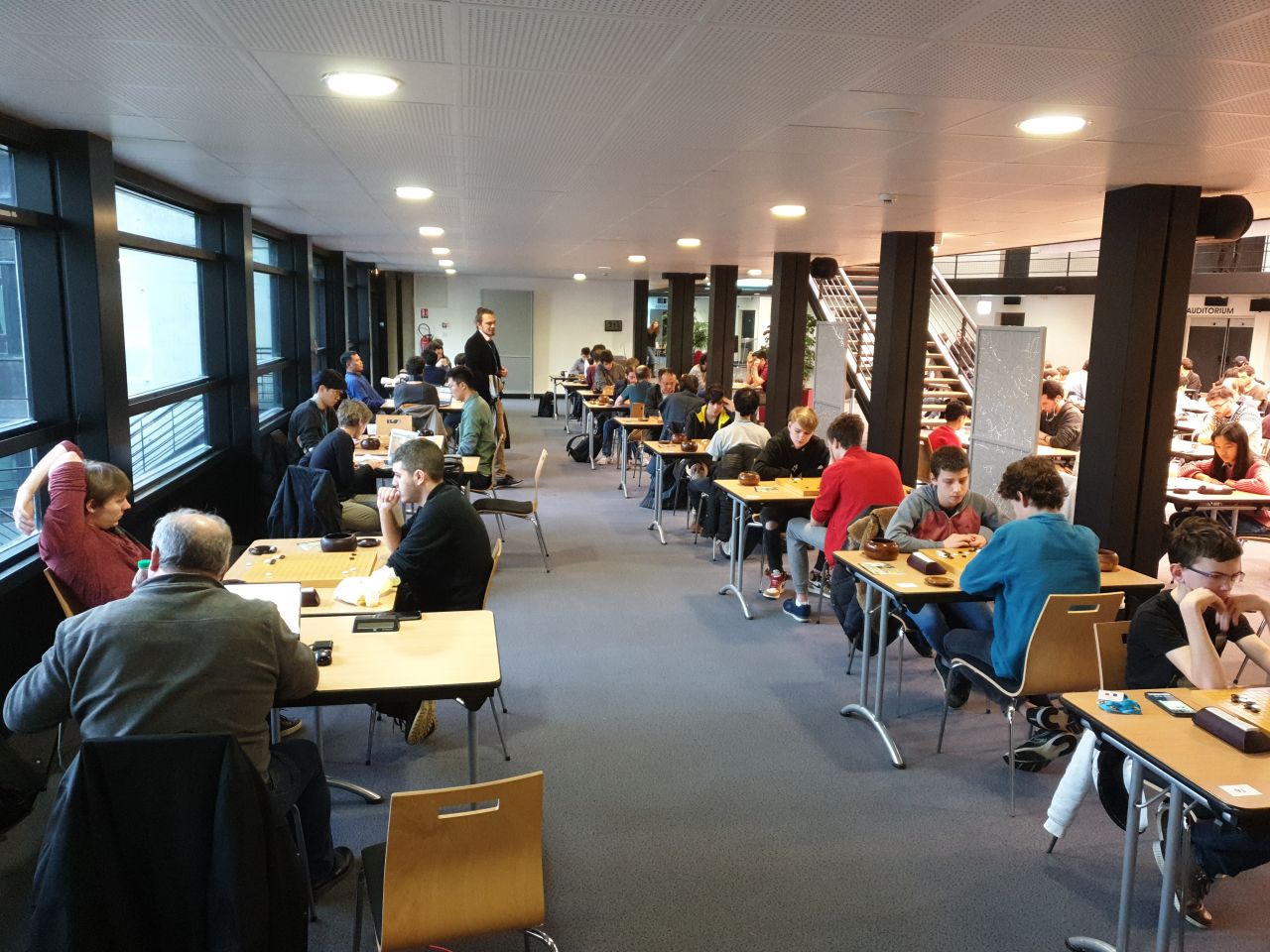 In-seong himself provided the commentary for the top three boards. A large lecture screen allowed all the ordinary competitors in the TIGGRE to follow the action on the top boards, but the commentary was also broadcast on the internet on the EGF Twitch channel.

In the semi-finals of the Ellie Cup, the Chinese professional Tian Wu won against Seong-jin Kim, and Ilja Shikshin won against Ali Jabarin. In the final game, which pitted these two very strong players against each other, Ilja had to bow down to Tian Wu, but received the 1000 € prize, offered by In-seong, to the best European player. Chimin Oh, the winner of the two last editions of the Ellie Cup finished in 3rd place this time, ahead of Benjamin Dréan-Guénaïzia, Oscar Vazquez, Ali Jabarin, Denis Karadaban and Seong-jin Kim. A total of 2700 € was distributed by In-seong to the six best players. Moreover, five players obtained points for the European Grand Prix 2020: Ilja 8 points, Benjamin 6, Oscar 4, Ali 2 and Denis 1. Congratulations to all of them! What about the open tournament TIGGRE? It is always a challenge to win five rounds out of five in a McMahon system. Three players were able to achieve this feat: Léo Chicoineau, Dorian Weisse and Frédéric Verrier. Two children also won all of their five games: Lubin Wilhelm who played the SEYGO and Jules Delamarche in the TIGGROU (see below the explanation of these tournaments). With 4 wins: Cezary Czernecki, Egor Arsentyev (SEYGO), André Némo, Thomas Piotaix, Colin Bourdeau (SEYGO), Samuel Arnaud, Antoine Giraudon (SEYGO), Léopold Maldamé (SEYGO), Noé Sellal (SEYGO), Lino Vizioz-Fortin (TIGGROU), Noé Poizat-Takeuchi (TIGGROU), Abdallah Mouissat (TIGGROU) and Richard Curteanu (TIGGROU). 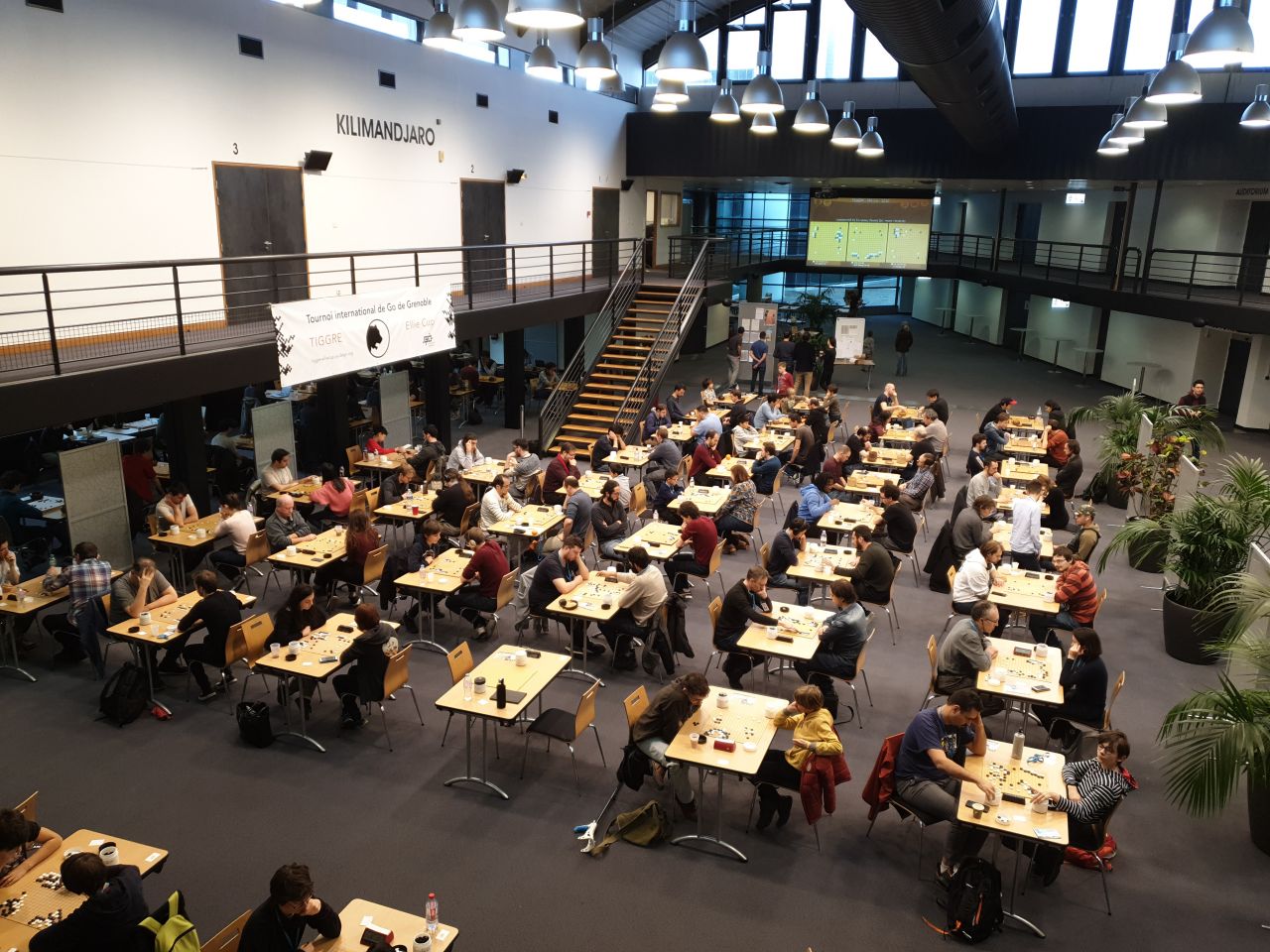 A brand new feature this year was the organisation of the first phase of the SEYGO Tour 2020. 20 young players participated in the knock-out competitions of the three age categories, but their results were integrated in the TIGGRE final standings. Linh Vu Tu (4d) was the winner in the U20 (four players), Lubin Wilhelm (3k) in the U16 (12 players) and Grigory Arsentyev (10k) in the U12 (four players). Prizes were distributed to the competitors in the form of vouchers: 200 € for the first place, 150 € for the 2nd place and 75 € for the 3rd and 4th place. These vouchers can be used by the youth players either in future SEYGO events, the EYGC, or to participate in the various go academies in Europe. 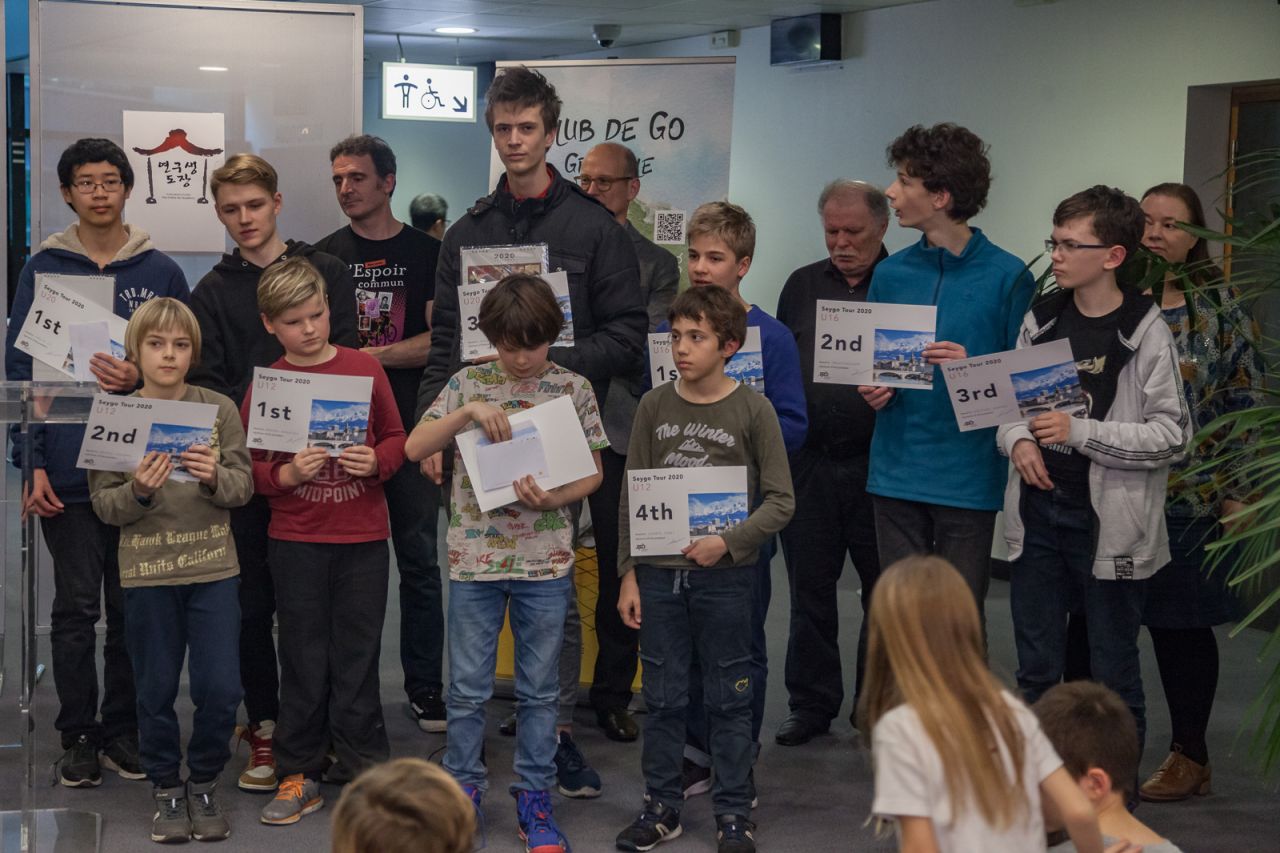 There was also a beginners' tournament, named TIGGROU, which gathered together about 30 local kids who are learning go in Grenoble’s schools. They were delighted to play their first official games and to see the European champions struggling for the Ellie Cup, right beside them. 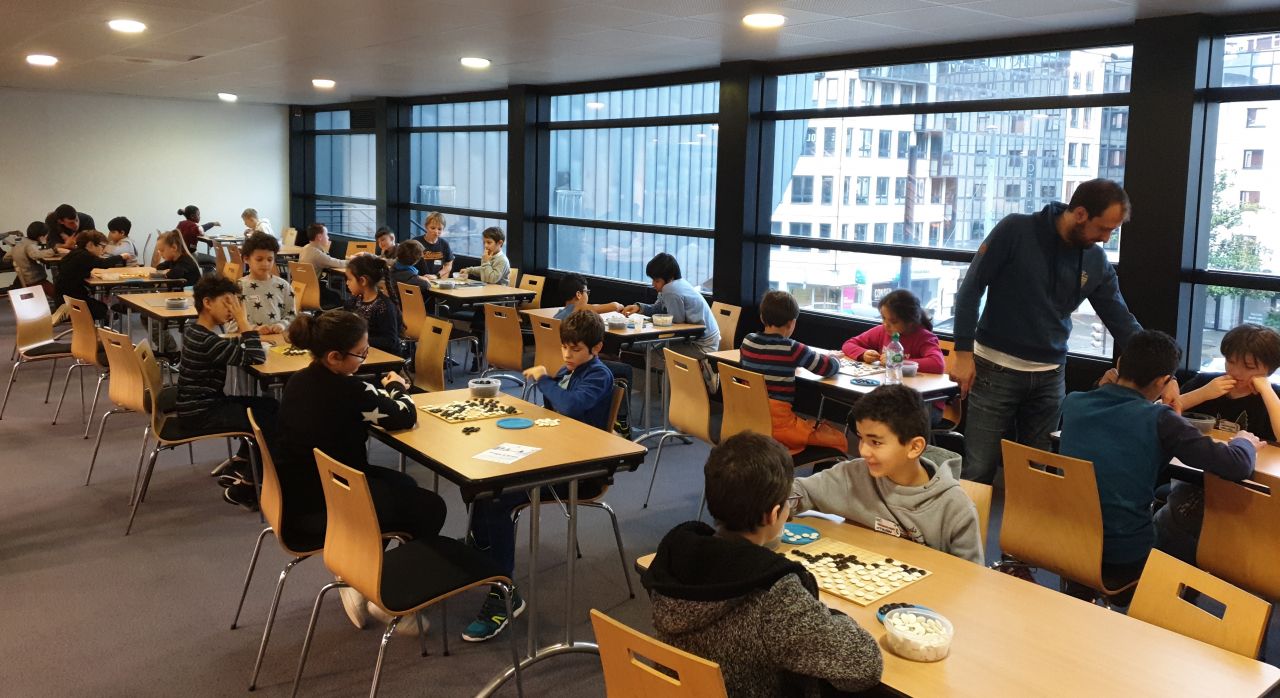 The prize giving ceremony was a great time for them, in presence of the Mayor of Grenoble, Éric Piolle. Martin Stiassny and Chantal Gajdos (president of the French Go Federation) were also present and everyone enjoyed the picture with the tiger masks offered to the kids. The Grenoble Go Club was very happy to welcome a delegation from China, made up of VIPs from the CEGO group, who are working for the development of go in Europe and kids of the Ge Yuhong Academy who came with their family. Ge Yuhong was also present, and indeed playing in the Ellie Cup. In the picture below, he is facing Ariane Ougier, Grenobloise and also European female champion. He lost this very close game by half a point. On Saturday evening, about 80 go players met in the Privilodges Hub, close to the congress centre, where they could eat, drink, play go and card games in a friendly atmosphere. Many discussions took place, particularly around Martin Stiassny: how can we develop go in Europe in the best and most efficient way? You can find the complete results of the TIGGRE - Ellie Cup here.

Many thanks to our sponsors, to the many volunteers who helped us to make this event a great success and to the photographers in particular Olivier Dulac and Didier Lefèvre.

See you next year in Grenoble for the 4th edition! 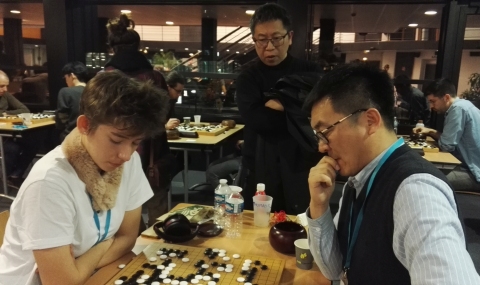