Back
Pandanet Go European Team Championship - France keeps its European title
By Antoine Fenech | News | 03.09.2020 20:17 | Views: 2090
The French team managed last weekend to remain European champions after defeating Ukraine, Czechia and Russia. During the regular season, Junfu, Tanguy, Thomas, Benjamin, Rémi and Florent did their job, taking second place in the league, and qualifying for the finals. Unfortunately, due to the Covid 19 pandemic, the final couldn’t take place in Ukraine as planned initially and had to be organized online.

This tournament was probably just one of the major go events which were being played online so far, and it was pretty difficult to define the conditions of play. Initially we were all asked to play from the same place, but in the French squad, Junfu is living in Paris, Tanguy in Nantes, Thomas in Lausanne and Benjamin in Budapest. Rémi can’t really help from Canada. Finally, Junfu, Thomas and Tanguy managed to gather in Paris and Benjamin was allowed to play from Budapest. As a captain my job was to make sure that the players could play in good conditions, respecting the rules set by the EGF. This year I didn't have to take my suit down to the dry cleaners, but there were cameras to set up so that everyone could be sure that the players were not cheating, using A.I. for instance. Of course, it wouldn’t even enter into my mind that any member of our team could misbehave in order to win a game, but one of our opponents was a bit mistrustful. Zhao Pei was declared the official proctor of the French team in Paris. Julia Seres was Benjamin’s personal supervisor in Budapest. Additionally, all games were being filmed and we were even asked by our opponents to broadcast the film of the last game online. I hope they enjoyed our improvised prize giving ceremony.

Leaving aside the anti-cheating business, we had a great time together. Once again, we showed an extraordinary team spirit and all the participants managed to fulfil their task. Mine was to cook, Benjamin’s was to win all his games, Junfu’s was to take care of the other teams’ leaders, Thomas’ was to bring the decisive point and Tanguy’s was to win against Dinerchtein. We also had a visit from some friends and supporters during the weekend and we made video calls for motivation with other members of the teams.

Before the first round, our players, besides Benjamin of course, were not that confident. Junfu hadn’t played a tournament since last year’s finals. Thomas and Tanguy hadn’t shown great results lately. But for the team, they were all ready to surpass themselves. Our first opponent was Ukraine. With Junfu, Tanguy and Thomas, we had gathered in Paris, in Thomas’ parents’ apartment where we could play with perfect conditions. The players were playing from the spacious living room while I was busy in the kitchen, keeping an eye on the games. Junfu was mistreating Artem. Benjamin had quite an easy game. The situation was unclear on boards 2 and 3. Junfu, Benjamin and Thomas finally won successively and despite the early death of one group, Tanguy managed to catch up and win by half a point against Andrii. We now had the time to remove all the computers in order to set the table for lunch, and the players could start their second match full of confidence.

The scenario was pretty similar against Czechia. Junfu and Benjamin were doing a great job while Tanguy and Thomas’ opponents were giving them a hard time. Especially when they repeatedly decided to play their last moves of byo yomi with just a few seconds left. I was struggling not to die from heart attack while I was stuffing tomatoes for diner. Fortunately, Thomas managed to find a ko that would enable him to make a great profit while his opponent had to defend his group. In the last game, Jan finally killed Tanguy but it had no consequences for the team. Russia had conceded a draw to Ukraine so we were leading the tournament after the first day. A draw against Russia in the final match would be enough for us to defend our title.

We could finally have the first beers of the day. Some friends had joined us: Benjamin and Julie, Osmin, Samuel. We had a nice dinner and we kept drinking beers and wine, showing no signs of stress ahead of the last game the next day. Benjamin was going out in Budapest but he promised me that he’d be home by midnight. At some point in Paris, the beers were missing and Tanguy and Thomas had to ride a vélib to go get some more. Anyway, we were full of confidence when we went to sleep before the great final that we had all expected. After a last motivation speech and video call with Budapest, the final against Russia was about to start. I totally trusted our players but it was too hard for me to follow the games from the beginning. I knew that the situation was going to change many times in the next three hours so I wanted to stay relaxed at least during the first hour. Benjamin Papazoglou had joined me in the Debarre’s kitchen. He was cooking and following the games while I was just making sure that the stream and the video recordings were still on. Despite a great start that probably made him too confident, Junfu was finally defeated by Ilya. He could then join us in the kitchen to analyse the other games. Benjamin tied after killing half of the board and we only needed one victory to be the champions. At that point, Thomas and Tanguy had difficult positions. Thomas seemed to be behind and Tanguy was fighting but had to play 6 moves in 21 seconds… It was too much to endure for me. I decided to leave the room until these six moves were played. When I came back after a few minutes, the situation had changed. Anton had let Thomas kill three stones that would give him the lead. Tanguy had managed a perfect result in the fight and only had to defend one territory. It was just a matter of minutes for our victory to be decided. We wanted to join Thomas for the count but Anton had just resigned. We went hugging in corridor, letting Tanguy focus on his game that he was decided to win.

After some more minutes we could finally celebrate all together. The title was well deserved. It was time to organize the prize giving ceremony. We made a video call with Benjamin on the TV screen, found the most improbable trophy in Thomas’ room and took many pictures with the French flag. Thomas had to ride a vélib’ again to get some champagne and we could finally chill and celebrate. It is our third European title and I feel very proud of my team, including all the players that have taken part in the qualifications and the finals, our other substitutes, our followers and everyone in France that has supported us. I feel grateful to Zhao Pei and Julia Seres, our proctors, that took their job very seriously and were a great help to our organization. I also would like to thank Martin, Vesa, Damir and all our opponents during the season and these finals. I felt a bit annoyed by all the “safety measures” we were required to take and that could sometimes be seen as a lack of trust but I totally understand that we have to set rules for playing these online games in perfect conditions. I hope that with this article I managed to show that only the great talent of our players and spirit of our team enable us to win these titles. 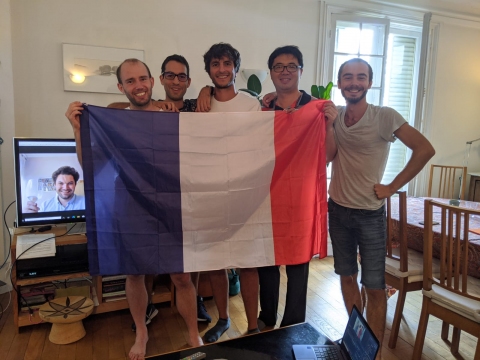