This time, it was not goats, but the 8 strongest players in Poland who were fighting for the title of the Champion of Poland! The participants were selected according to their results in the previous tournaments: the top 4 players from last year's championship were joined by 4 players who got the slots from June qualification tournament in Warsaw.

Without a single defeat, Stanisław Frejlak 1p won the title of the Polish Champion. Besides the title itself, Siasio was rewarded with a big golden cup and a bowl for making matcha tea, so now, even if he doesn’t like matcha, he has to learn how to do prepare it. Koichiro Habu 5d, a polish player who grew up on the Kyushu island in Japan, took second place. Third place went to Cezary Czernecki 4d, who travelled especially to the tournament from Switzerland. Fourth place went to Dawid Jurkiewicz 4d, a young analytical player representing a Go club from Poznań. This year's tournament was very exciting and brought many suprises. Directly in the first round the most decorated player of the tournament, 16 times Polish Champion Leszek Sołdan 4d, who also took the second place last year, lost his game to Maksym Wałaszewski 3d. This tournament was not lucky for him: he ended on 7th place. In contrast, for Maksym Wałaszewski 3d fortune was smiling: in the 6th round he won against Koichiro Habu 5d. All these unexpected losses and wins made the fight for a second place even more intriguing. The games were played in Fischer time, with 1 hour of basic time and 30 seconds of bonus, which made some of the games last for 4 hours or longer. All the games were broadcast on OGS, where the commentators put their best efforts to share the atmosphere of the games with the internet audience. Every emotion of the player was immediately transmitted into OGS chats, ending with phrases like: «He nervously swallowed and searched for more water, but there was none!», «Player fiercely hit on the watch and won ko!!!». Even after the games, players were rereading OGS chats, wondering and laughing about the comments. The live commentary was provided by Lukáš Podpěra 7d on the Twitch channel of the EGF. The sgf records of all games with AI analysis can be found on the official page of the tournament: https://mp.go.art.pl/2022/en/results

After long exhausting games players were rushing to the kitchen, where volunteers already had prepared a traditional polish salad (spaghetti with vegetables) and unlimited quantity of sandwiches and sweets. As one of the partners was a polish tea company Herba-ta, the participants had 16 sorts of tea to choose from.
There was also a balcony, where all the players divided into 2 factions: «unhealthy» (smoking) and «healthy» (breathing, enjoying view on the surrounding gardens and doing yoga).

Parallel with the main tournament, a side tournament with around 40 players took place in the neighbour conference hall. Oleksandr Yeroshkin 4d remained undefeated during all six rounds and became the winner of the tournament. He was followed by Grzegorz Marczak 3 d (who only lost to Oleksandr) and Przemyslaw Dyszczyk 1d.

Side tournament was played with Fischer settings as well, resulting – especially by children players – in having more time at the end of the game then at the beginning. The competition was hosted at the Wunderman Thompson Technology company and organized by club «Honte» from Poznań, headed by Sylwia Barcicka, who persuaded the company to provide both space and finances for the championship.
Do you also work in a big company and dream of organizing a Go tournament, maybe even named in your honour? The Go World is waiting for you! Authors: Liubov Krainova, Maksym Wałaszewski 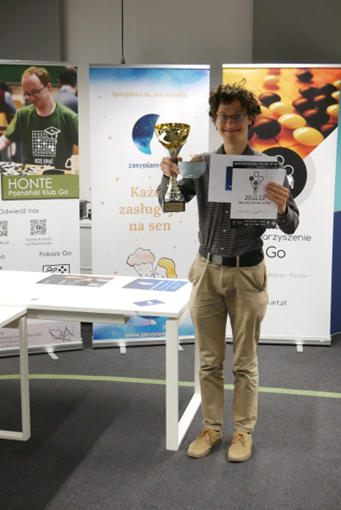