Back
Junior Match between China and the UK
International | 09.09.2020 9:52 | Views: 2454 | Comments: 1
An international match was played between teams from UK and China. The UK team was drawn from the national youth squad, which includes players up to age 19. The team from China was drawn from the pupils of Li Ang, a professional 3-dan (Lyonweiqi on KGS). Their ages ranged from 6 to 10 years old. The match was played with the same system as that of the famous Super Go contests - the winner plays on.

The match was set in motion in May, when Cambridge University student Tunyang Xie connected Li Ang with Paul Smith. Li Ang had been looking to arrange a match for his pupils, and Paul Smith, one of the key youth organisers in the UK, was immediately interested in replacing the regular tournament activity that had disappeared during the Covid-19 restrictions. The idea was to play a match in the style of the Japan-China Super Go contests which took place in the 1980s and 1990s. The Super Go system works like this. The first players from each team play each other, then the loser drops out of the match and the winner continues and plays the second player from the other team. It carries on in this way, with the winner staying on each time and the loser dropping out. Finally one team runs out of players and the other team has won. Usually both teams put their strongest players at the end of their team order.

In order to make the match a balanced one, the criteria for choosing the two teams had to be different. Whilst Li Ang's team came from a single class, Paul Smith couldn't do the same. His team had to be formed from the UK youth squad, where the age restriction is U-20. Three places on the UK team went to the top players from the 2019 British Youth Championship - youth champion Jayden Ng, runner-up Gene Wong and third placed Daniel Yang. Then some fast-improving teenagers, Scott Cobbold and Jonah Burnstone-Cresswell who both played their first tournaments in 2019 but have reached around 3-kyu level. And at the younger end of the team were two 8-year-olds Alexander Timperi and Yanyi Xiong who had been first and second in the national under-8s age group last year playing at 12-kyu and 15-kyu but had both become much stronger since then.

The first players on the teams were both girls. On the UK team was Lea Wong, aged 11 who lives and goes to school in London but at the time of the match was in Hong Kong visiting some family members. The first player on the Chinese team was Jiao Sitan who was only 6 years old. She is clearly very strong for her age but Lea won this game and the next two by a fairly clear margin.

The fourth game was Lea against Zhang Zhexuan. Again Lea was ahead at the beginning, capturing some stones in the bottom left and mapping out some territory at the top. But Zhang developed a large area in the lower right centre and then broke into the top area as well, in the end he was a comfortable winner. Zhang also won the next game against Caleb Monk, recovering from losing a fight in the lower right by splitting a group at the top left into two and killing both parts.

Next up for the UK team was Yanyi Xiong from Cambridge, who played in a swashbuckling style, often invading and making complications. His first game against Zhang started badly as his bottom right corner group died and another group at the bottom seemed in great danger. But that group ended up winning a semeai and after that Yanyi was clearly ahead. In the next game Yanyi also fell well behind until an unlikely-looking invasion in the lower right corner worked and the game became close, he ended up winning by 9.5 points. He won the next three games as well, in each case pulling well ahead in the late middle game. So Yanyi had won 5 in a row and the UK team were now 8-2 ahead.

In the next game Wu Haochao for Li Ang's team finally ended Yanyi's run and then he also won by a good margin against Alexander Timperi and Alexander Hsieh so the match was pulled back to 8-5.

The UK's next player was Jonah Burnstone-Cresswell who first played in a tournament only in November 2019 but has rapidly become a strong player. In his first game against Wu Haochao he was always ahead and won by resignation. But his next game against Bai Yichen was the closest in the whole match. Jonah was a long way behind in the middle game, Bai had territory on the right and bottom while Jonah had some stones in the centre that did not appear to be achieving much. But Bai missed quite a few chances to win, and his lead slowly disappeared, in the end Jonah won 2.5 points. Jonah won his next game as well, it was quite close until he killed a large group in the top left.

Exciting.sgf
Download Sgf-File
At this point the score was 11-5 and Li Ang's team was down to their last player Li Yuze. However the match was far from over. Li Yuze won his next three games (without ever looking in danger of losing) against Jonah, Scott Cobbold and Edmund Smith - all around 3-kyu level - and the match was getting a lot closer. Our next player Gene Wong also lost (a group died in the top left) and the UK waw down to only 3 players left.

Number 10 of 12 players on the UK team was Tom Bradbury, a student at Sheffield University. At the time of the match he was at the Jena International Go school in Germany. Tom's match against Li Yuze was quite even in the opening but he fell behind after a sequence in the top left corner and then never found a way to catch up. Our next player Daniel Yang also lost so the score had come back to 11-11 and the last player on each team. At this point Li Yuze had won 6 in a row and never seemed to have been seriously threatened by the UK players.

We watched the final game with some excitement to see what would happen. Our player was Jayden Ng, the reigning British Youth Champion. According to AI analysis Jayden fell over 10 points behind in the opening and early middle game. But as the game went on he caught up and moved ahead, in the end he won by 11.5 points. So our team had got there in the end but only just!

Final.sgf
Download Sgf-File
We are very grateful to Li Ang for giving our players this opportunity. It was a very enjoyable match and one in which our players learned a lot. We hope there will be the chance to play more matches like this.

Li Ang very generously donated signed books as prizes to the three players on the UK team who won 3 games or more (Lea, Yanyi and Jonah). Thanks are also due to Louise Bremner and the other KGS administrators who helped us to publicise the match with announcements and priority listing of the games. And to Tony Atkins who reported on the match on the BGA website and helped to supervise some of the games too. 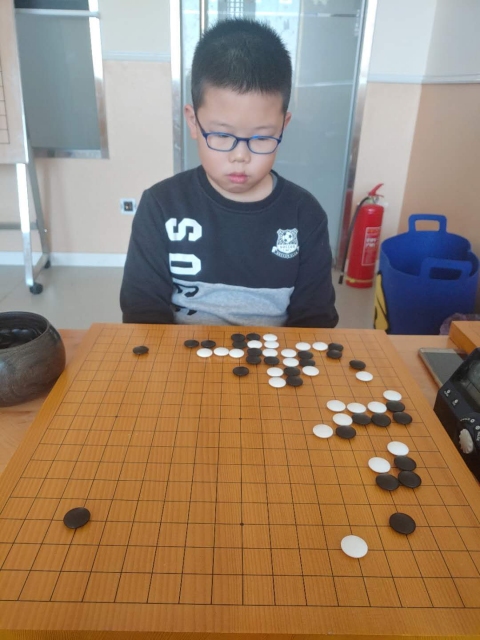