Two American professionals, Calvin Sun 1p and recently promoted Ryan Li 3p will be joining our league. Calvin is joining for the first time while Ryan is playing the league for the second time, hoping to recreate his success from season two in which he was victorious.
We aim to increase cooperation even further in upcoming seasons and hopefully even more of the American pros will join.

The EGF traditionally sponsors the league, joined by the NAGF this time.

We are also happy to continue cooperation with our long-time sponsor AI-sensei.

We've got a new sponsor this time: BadukPop, an interactive tsumego app for mobile platforms.

Special thanks to Lee Hajin and Ryan Li who helped with setting up the cooperation with our new sponsors: the NAGF and the BadukPop.

Preliminary for the amateurs

This time we are giving a chance to the top European amateur players for trying their luck against the professionals. We give them two spots in the upcoming league. There will be a preliminary tournament held next weekend in which the top amateurs will battle it out for the two seats.

The league's format is also going to be slightly different than it used to be in the previous seasons. After the preliminaries, the players will be divided into two groups with each group consisting of:
1) Three  EGF Pros
2) One NAGF Pro
3) One European amateur

The games are getting a bit more main time with 30 minutes instead of the 10 minutes we used to have in previous seasons.

Also, this season's matches will be played as a best of two, with the possibility of having a tie result for the match.

Once all the matches are played, two players will qualify from each group to the playoffs and compete for this season's 2000€ prize pool.

We will stream on the EGF Twitch channel as usual on Saturdays & Sundays at 18:00 CEST starting on May 15th.

If you would like to support the league you can consider making a pledge on our Patreon page.

For more information see the webpage of the league. 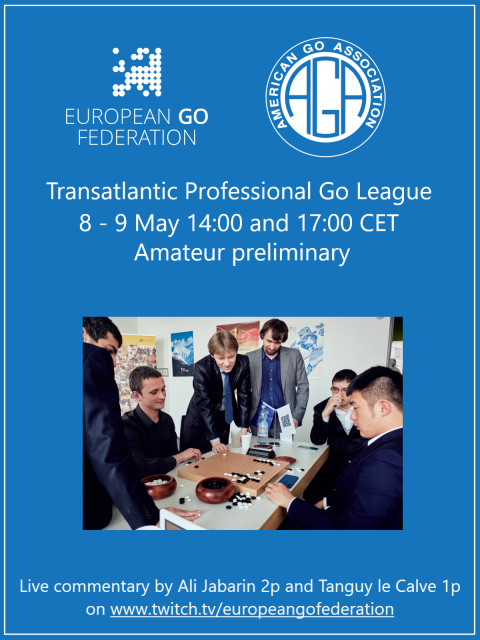 Comments:
kkp
#1
06.05.2021 9:23
Where did you read that Ryan Li promoted 3p ?
I cannot find this information.
https://www.usgo.org/go-professionals-us-and-canada
https://senseis.xmp.net/?RyanLi
AJ
#2
06.05.2021 17:49
I think the rank promotion system for NA pros was only established recently and applied retroactively. You can find info about it on https://nagofed.org/