For the third time in a row, France won the European team championship.
This season didn’t start that well for the title holdersm with a draw against Israel and an early loss against Ukraine. But Junfu, Tanguy, Thomas, Ben and Rémi managed to catch up and qualify for the finals by finishing in third place in the league.
Because of covid, this final had to take place online again, hopefully for the last time. This year the whole French team managed to gather together in the same place. It’s quite a performance, since the four players live in three different countries.
Thomas’ parents had lent us their flat in Paris for the weekend, enabling us to play in the best conditions. The four players of the team were Junfu, Tanguy, Thomas and Ben. Miléna was there as our proctor and as a team leader, I was in charge of all the other tasks (mostly cooking…).
This year we got to face our rival, Russia, for the first round. Although our players hadn’t practised a lot lately, we were really motivated and quite confident. Russian rising star Alexandr Muromcev was playing on the fourth board but he had to face the long time undefeated Ben0. The four games were looking good for us in the beginning. Junfu ended first, beating Ilya. The partners followed and the first match ended up with a perfect score for us.
In the afternoon we were facing Poland and things didn’t go as well as they had in the morning. Tanguy was involved in a difficult fight against Sanislaw. He managed to find a way out and to play his last byo-yomi stones with only one second for each move. Junfu’s game was hopeless against Mateusz. No need to mention that our GOAT did the job as usual. Finally, Thomas brought the victory winning an endless half point game with Koichiro Habu. After the first day, France had won both matches and was in a perfect position before facing our last opponent Ukraine. Our friends and supporters had joined us with a couple of beers in order to spend a nice evening and we woke up smoothly on Sunday, ready to finish the job.
I don’t like to watch the beginning of the games, especially when they are so important. It is too stressful for me. But when I caught up in the middle, the situation was quite encouraging for us. Ben was about to launch the final kill. Artem’s fight seemed hopeless against Junfu. Tanguy was on his way for a short win against Andrii and Thomas’ game was also very promising. Finally, Artem and Dmytro resigned and Tanguy’s mistake in the endgame had no consequence for the final result.
France were champions once again and it was time to do what we were best at: celebrating!

Game commentary by Dai Junfu :
After winning the first two rounds, France only needs a draw against Ukraine, the only team that had defeated us during the season.
Black: DAI Junfu 8, White: Artem Kachanovskyi 2P

B15 is looking for the simplest joseki facing san-san invasion. Personally, I think it’s better for White to push at A instead of playing W22 because B23 becomes the perfect invasion and threatens the white group on top. After B35, he has not only managed to flatten white’s potential on top but he also developed his own potential on the right. Although White manages to reduce with 40-56, Black is leading because he’ll take advantage of the fight on the left.

White pushes at 1 instead of 22 in the real game. It’s an important move to remain strong on top. If Black plays kakari at 2, then White can build a moyo on top with moves from 5 to 9.

B57 and 63 start to develop the potential on the left. White helps reinforcing Black’s stones on the bottom-left to get sente and start reducing at 72. Black splits with 73, launching the decisive fight. W86 is too greedy. He needs to settle his group instead of making territory. After B95, White is facing a hard time since both his groups in the centre aren’t alive. But Black needs to make profit from his attack otherwise he won’t have enough territory.

With moves 1 and 9, White almost settled his group on the left. Even if White loses the corner territory, the game will remain close if Black doesn’t take profit from his further attacks.

B103 is the vital point of White’s group on the right. This group doesn’t have any base and needs to escape. B109 targets the vital point of the other group. These attacks end with the catch of White’s whole left group. W128 misses his last chance. If White lives with the left group and sacrifices the corner, the game remains playable. After the good move B133, there is no way for White’s group to live.

Instead of 128 in the game, W1, makes the group alive. Later Black will extend at 4 and threaten White’s group on the right. Black will come back at 8 to kill the corner. Black is leading but there is some aji remaining at A.
Black has to play 8, otherwise White can play B and aim at the cut at C to create a ko.
With this victory, France defeats Ukraine 3-1 and keeps their title. Russia ends at the 2nd place; Ukraine is 3rd and Poland 4th. 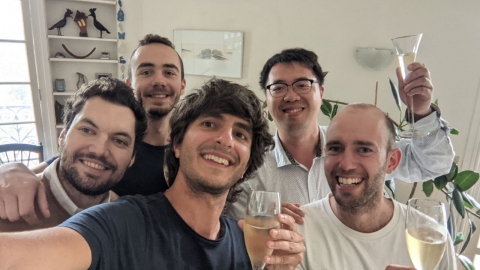 Comments:
Peter Dijkema
#1
25.11.2021 19:25
French formula for fame in finals of team tournaments in the theatre of European Go is their spirit , based on fine friendship , fun (and good food) : Chapeau & Champagne !