Back
Confucius Cup 2022 in Dublin
By Eoghan Barry | News | 02.10.2022 13:53 | Views: 803 | Comments: 2
It sometimes feels as though events are conspiring against the Confucius Cup. In 2018 the tournament was all but cancelled when the biggest snowstorm in living memory hit Dublin, shutting down the airport and public transport throughout the city. There were no tournaments in 2020 or 2021 because of the Covid pandemic. And in 2022 we were faced with an equally potent force of nature: Garth Brooks. The big-hatted country singer was playing five dates in Croke Park, and the price of hotel rooms in Dublin had rocketed well above a thousand euros per night. Bowing to the inevitable, we postponed the tournament by a week.

One of the truisms of the tournament director’s life is that the players who have the shortest distance to travel will be the last to let you know that they’re coming, and the last to arrive. Kim Dohyup, flying in from Korea for his third visit to Europe this year, arrived around midnight on Wednesday. The substantial Romanian contingent led by Cornel Burzo checked in on Thursday night. Dubliners on the other hand…still filtering in minutes before the start of the Rapid tournament on Friday night. The last registration email hit my inbox at 6.16 on Saturday morning, just as I was putting the porridge on the stove for breakfast.

The Dublin Rapid tournament has a couple of quirks: the first round is played with eighteen minutes on the clock, absolute time; for each subsequent round the time is reduced by two minutes, reaching ten minutes in the final round. Handicaps are accelerated, peaking this year at nine stones plus 39.5 points reverse komi. The onus is on the dans to sow fear, uncertainty, and doubt among the opposition. Kyus must be resolute, pure of heart, and remember that the odds are stacked in their favour.

UCD security arrived to close the building for the night with one round left to play but granted us another half-hour’s grace…just enough time to finish up, despite the best efforts of the nameless individual who had set some of the clocks to ten hours instead of ten minutes. Befitting the political tenor of our times, chaos ruled the day, with Kim Dohyup winning the tournament. But Irish Go Association President Niall Tuohy despatched several dans en route to second place, to go with his second place in the British Go Congress Lightning tournament last year.

Thirty-nine players turned out for the Open tournament, including a handful of Europe’s strongest, lured by the generous prize money and Grand Prix bonus points on offer. The tournament took place in the spacious, light-filled atrium of the palatial Confucius Institute building on the campus of University College Dublin, a few kilometres from the city centre. The top boards were exiled to a smaller room upstairs, sacrificing elbow-room for peace, quiet, and the ego boost of having their games broadcast for commentary and review by Ilya Shikshin 4p and Andrii Kravets 2p. Players who finished their games early could watch the Twitch broadcast in the lecture theatre next to the Atrium, or stroll around the UCD grounds in rare September sunshine. Alongside the Go tournament, the European Xiangqi Championship ran in the library.

The decisive encounter took place in the third round, with Stanislaw Frejlak 1p eking out a 3.5 point win over Kim Dohyup. Dohyup shook his head as he studied the standings, muttering “super big mistake” to himself, while his rivals swarmed past him to get in line for the Chinese buffet set up in the canteen. In an innovation warmly welcomed by the French and Romanian delegations, this year the buffet included wine, and I had to prise the glasses from their hands when chucking-out time came at 9pm. The serious drinkers headed into Toner’s pub (home to the Dublin club) for a few pints of Arthur’s finest. I went home to try and get a few much-needed hours of sleep.

At the end of the second day, positions had not changed: Stanislaw was in first place with five wins, Dohyup in second place on four. Chen Tianyi took third place on tie-break, maintaining a family connection with the Confucius Cup that began in 2017 when his father was part of a visiting delegation of Chinese professionals. Prizes awarded and tables cleared, the 2022 Confucius Cup came to an end.


Fifteen people made it into town for dinner and a lengthy linguistics seminar from John Courtney at Dublin’s best ramen bar (imaginatively named The Ramen Bar). A hardy few went on to Neary’s pub for final pints and rengo where Cornel demonstrated that his skill on the goban is exceeded only by his skill at heckling (slagging, we would say in Dublin.) If it’s tough being his opponent, it’s tougher still to be his rengo partner! 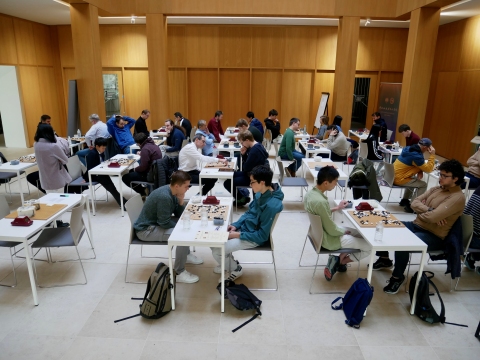