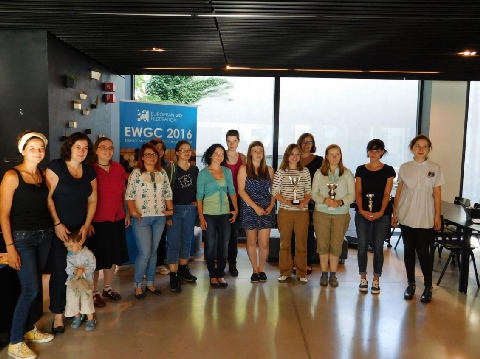 The European Women Go Championship took place this year on the 20th and 21st of August in Belgium, in the charming city of Antwerp, once a prominent port. The event took place in a modern, lively youth hostel in the city centre, which provided an excellent opportunity to promote the game. The big banner placed by the entrance informed the travellers about the event. They  could easily find a way to the playing rooms and watch the participants through the glass walls. We could hear some of them proudly explaining to their friends what the game was about.

Sixteen players from ten different countries gathered together for this event and fought five games for the first place. The referee, William Wandel, has put a lot of thought into the pairing to ensure the balance between having interesting games for all and avoiding an early confrontation between the top players. With 16 participants, he preferred to have a Swiss tournament with only four rounds (effectively a knockout tournament), but since five rounds had been announced (and we would not have liked a four rounds knockout), he had to think of a different system. He used the cut and slide method in the first three rounds, the pairing program of Gerlach for the last two, and direct comparison, SOS-2, SOS-1 and SOS as tiebreakers.

Some unexpected results proved again that in Go the player with the highest ranking does not always win. Irina Davis (1k, Romania) showed an excellent performance, as she beat Joanne Leong (2d, United Kingdom) in the first round and Elvina Kalsberg (3d, Russia) in the second one. Also the participant with the lowest ranking, Catherine Fricheteau (10k, Belgium) demonstrated a fantastic fighting spirit: in the first round she gave Marika Dubiel (2d, the Netherlands) a very hard time and in the fourth one she won against Senem Celikkol (4k, Turkey).

Between the rounds and in the evenings we had the chance to visit the city’s festival. There we enjoyed the traditional Belgian beer and local products, listened to live music and watched joyful people dancing in the middle of the market square. This was a pleasant turn of events, since we usually do not have the time to combine Go tournaments with experiencing the beautiful cities in which they take place.

One might ask: Why is there an Open European Championship and next to it a separate European Championship only for women? A little anecdote could be the answer: Many years ago, when he was still very young, one of today's strong European 5d players took part in a tournament. He lost against a girl and stopped playing for a couple of years. Even though this is a single example, do not be naive and think that it happened only once. We would surely not like that to happen again, so we decided to have our own tournament!

We would like to thank to the organizers and to the referee for their admirable job and we are looking forward to the European Female Go Championship 2017, which will take place in Odessa, Ukraine.

EGF executive received a protest raised by Manja Marz and Natalia Kovaleva against the final table standing of EWGC 2016 announced by a referee immediatelly after EWGC was finished. EGF executive realised that there was a mistake in a use of tie-breakers criteria and they were used improperly. Therefore, the EGF executive decided to correct an order of the final table. To avoid any misinterpretation, the EGF executive decided to use as tie-breakers those criteria which are generally accepted for EWGC and easily understandable, it means: points, SOS, SOSOS in that order. This decision is valid since 5th October 2016 when it was taken.

This order is not valid anymore, it's just here because it has been changed!

Comments:
Frank
#1
23.08.2016 10:17
Thanks for the nice report. One small remark: Antwerp still is a prominent port, although you can not see that in the historical centre of the city where the playing took place.