The first stage of the SEYGO Tour 2020 took place in Grenoble on 1st and 2nd February, as part of the TIGGRE - Ellie Cup tournament. This new tournament on the European scene is growing year after year, and for its third edition gathered together 157 players. TIGGRE stands for Tournoi International de Go de GREnoble: its international status was highlighted this year by participants coming from16 different countries, attracting even American players!

We were also very happy to welcome a Chinese delegation, with several children from the Ge Yuhong Academy.

An important feature of the TIGGRE - Ellie Cup is its focus on youth. The Grenoble go club is particularly active in developing go in schools. Its youth go school is also recognised, thanks to the great go teacher In-seong Hwang and some famous pupils, like Ariane Ougier, who became European female champion last September at the age of 20.

We should also emphasize the role of In-seong as a strong support for the most promising young European players: three years ago he created the Ellie Cup, top group of the TIGGRE, and is still sponsoring it, thus encouraging the youth to practice go in prestigious tournaments, to improve their skills and to reinforce their passion of the game in order to reach the highest levels.

This context was just excellent to welcome the first stage of the SEYGO Tour 2020. Twenty young players took part in the knock-out competition: 4 in the U20 section, 12 in the U16 and 4 in the U12. They were all French, apart from Egor Arsentyev and his brother Grigory. In addition, a beginners' tournament, named TIGGROU (little tiger), gathered 28 kids from the Grenoble schools. In total, about 60 players under 20 participated in one of the competitions offered to them. One can note that some strong players (Vlacheslav Kaymin, Anton Chernykh, Oscar Vazquez, Guillaume Ougier, Samuel Teissier) preferred to play the Ellie Cup instead of the SEYGO, willing to meet the strongest possible opponents.

In the U20 section, Linh Vu Tu (who is actually still under 16) won his two games. Egor Arsentyev arrived 2nd, in front of Nicolas Robichon and Pablo Dentant.

In the U16 section, Lubin Wilhelm was the winner, devancing Benoit Robichon, Gaultier Bernard and Colin Bourdeau.

The U12 section has seen the victory of Grigory Arsentyev, followed by Léopold Maldamé, Eli Courteille and Léonard Paret.

A total of 1500 € in the form of vouchers was distributed to the 4 best placed players in each category (200-150-75-75). SEYGO Vouchers are multi-purpose and can be used to cover costs of accommodation and meals in future SEYGO events or EYGC, or to cover fees for EGF Academy, as described in the SEYGO Project webpage.

All results (integrated into the TIGGRE - Ellie Cup open tournament) are stored in the European Go Database: https://europeangodatabase.eu/EGD/Tournament_Card.php?&key=T200201N
No comments posted...

The following map shows the venues of SEYGO Tour events in 2022. The journey shall start in Prague as a live EYGC in March 2022, continue online with two live events just before EGC in Vatra Dornei and Summer SEYGO tournament in Croatia. The events in autumn will be held online unless the organizers decide to host it "live". 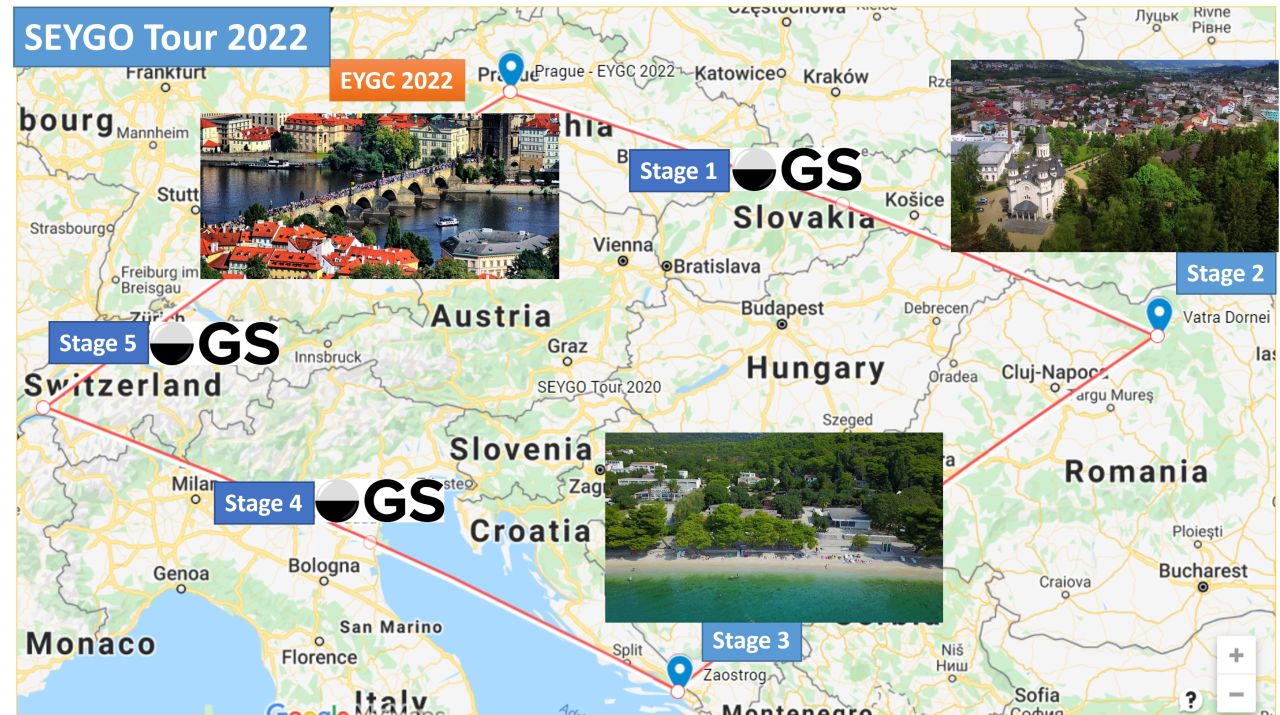 The SEYGO Tour in 2022 is going to start virtually, but we had two "live" tournaments along the same path.
27th European Youth go championships, played live in March 2022, will be counted toward SEYGO Tour 2022 Grand Prix.
The following table shows known dates and places for five SEYGO Tour events in 2022, with links to event organizers: